The country has certainly changed a lot since the November election.  Shortly after the president was elected, there were stories about people of color being attacked and being told to go back to their own country.  Racially charged graffiti found in schools, and a recently a mosque in Texas burning to the ground just hours after the immigrant ban was signed into law.

As a member of the trans community, I am worried about us.  It’s no secret that the current vice-president is very anti-LGBT and I worry about our rights being taken, I worry about attacks on our community.  The first time I went out after the election I felt an apprehension I hadn’t felt since the first time I left the house years ago.  Fortunately it was a MN T-Girls event and one of the reasons I founded the group was the belief of safety in numbers, or, I suppose, we are stronger together.  🙂

In the times I’ve been out since the election, I’ve braced myself for…something.  But so far there hasn’t been any incidents.  In fact, it has seemed a little more positive than usual.  The MN T-Girls event in November was dinner at a wonderful restaurant and as we discussed the election and our fears, a group of cis-women approached our table and let us know how happy they were to see us.  I was so happy to hear to hear that.  I thought by being out in public was, in a way, an act of defiance of the new administration.  They might hate us, they might want to pass laws against us, but we are not going back into the closet.  I can’t go back in the closet, between all my dresses and heels there is no room for me.  It was also wonderful to hear support from…anyone.

The most recent time I was out was also for a MN T-Girls event where we went shopping downtown.  This was a fun afternoon and I struck up a conversation with another woman who was shopping.  As I browsed the racks she mistook me for a sales clerk and we started to chat about…well, clothes, of course.  I loved this little conversation because it was initiated by her.  I have no doubt in my mind she knew I was (and still am, I suppose) transgender but she spoke to me anyway.  I know that sounds silly but I wonder if anyone avoids making conversation with me because of who I am.  If they do, this woman did not.  It was a fun day and I was happy that the day passed without incident.

However, I still wait for something.  I fully believe that people who are anti-trans, racist and sexist feel emboldened now that we have a president and administration who has a track record of these traits as executive orders such as the immigration ban are signed into law.  I live in a very liberal city in a state that voted for Hillary Clinton (or against Trump in some cases) but so many of us live in towns and states that went the other way.

Have you experienced any change in people’s attitude since the election? 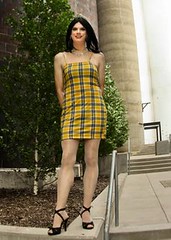