Being very active and visible on social media can leave one open to comments, direct messages, and emails.  I post a lot of photos on my website and Flickr and I read every single comment.  I also get a lot of messages, most of which I reply to.  Many of the comments and messages are very nice and polite, but there are some that are very sexual and disturbing.  Men will contact me or comment with what they would like to do with (or to) me.  These desires can range from anything from wanting to buy me lingerie to sucking my toes (gross) to having sex with me (also gross).

These comments are unsolicited and are not responded to.

These comments are not flattering or affirming.

These comments do not make me feel beautiful or desired.

I ignore them, but they will often linger in my head for a while before I can push them out of my mind.  I do not invite or deserve these disturbing and sexual communications.

Right now some people might be rolling their eyes and thinking this is what I get for posting photos like these: 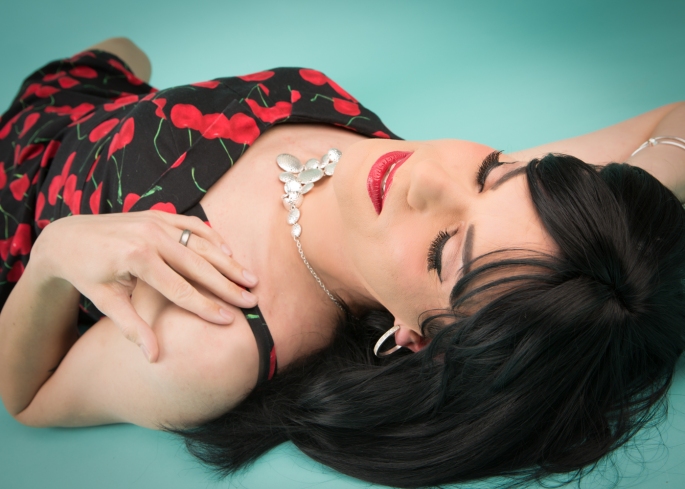 Yes, I know this photo is very much on the sultry side, but even if I was lying on a bed wearing nothing except a thong, overtly sexual messages and comments are not appropriate nor are they warranted.

It’s not okay to blame the victim of any harassment or point to what a girl was wearing and thinking that she “invited” these comments, or opened herself up to inappropriate messages.

Comments like these are not uncommon to women.  T-Girls often get messages (sexual and otherwise) from “chasers”, a term to describe men who fetishize and seek out transwomen specifically.

Yes, I know.  Not All Men.  Not all men send explicit messages or write or say sexual comments to women.  Let’s get that out of the way.  I don’t want a flood of emails telling me that not all guys are creeps.  I know that.  And yes, I know that some men think they are paying me a compliment but telling me that they fantasize about me or that I…ah, arouse them is not okay.  Telling me that I am beautiful is one thing.  Telling me what you want to do with, or to me, is not.

It’s easier to ignore creeps online.  Twitter makes it easy to block or mute people, for example.  In the real world it’s much harder and much scarier.  The first time a man approached me in public was about six years ago.  I had just gotten a makeover and was wearing a bright red dress and red patent heels.  Again, it doesn’t matter what I was wearing but I remember my outfit because I felt really good that night.  I looked good.  It was a long week and I was happy to be out on a Saturday night.  My dress was new, my makeup looked amazing.

I was meeting some friends at a bar and typical me, I was about an hour early.  I saw a man glance over at me a few times but would look away when I caught him.  I immediately felt uncomfortable.  I had hoped he wouldn’t come over.  When I saw him take his bottle of beer and finish it in one swallow, I knew he found a little liquid courage.

And sure enough, he slid off his bar stool and ambled over to me.  I was standing near the back of the bar and I felt a little trapped.  I had hoped he was just heading to the bathroom but he made a wobbly beeline over to me.

“You sure look pretty.”

I politely smiled and looked away.  I started to walk in the direction he had come.  He sidestepped in front of me.

I pressed my lips together and continued to not look at him, hoping he would pick up on my body language.

He asked my name and tried to engage me in small talk.

Why was I angry?  I’m sure in reading this it sounds like a guy just talking to a girl at a bar, what’s the harm in that?  But it wasn’t just a guy talking to a girl.  The second thing he said to me was wanting to date me.  He stepped in front of me when I tried to walk away.  It felt like he was trying to intimidate me.  It was working.

I was angry because I felt powerless.  I didn’t know what he would do.  He had already sidestepped in front of me once, and I was pretty sure he would do it again.  I didn’t know when he would leave.  He wasn’t picking up on my non-verbal communication or he was choosing to ignore it.

I was angry because I had a cute dress and a really good makeover and a long week and this… guy comes along and makes me feel powerless.  Scared.  Sexualized.  Trapped.  I wanted to be direct and tell him to leave me alone.  But I was scared to do that.  He looked stronger than me, he might have a weapon, he might have friends nearby.  I’ve heard it’s better to be safe than polite.  It’s true.

I gathered up the courage to interrupt him and told him I was married.  I remember thinking that this was a risk because I didn’t know what he would do.  Would he be angry?  Dismissive?  Would he (please) walk away?

He stopped talking, looked me up and down slowly, and hobbled back to his bar stool.

I shook for a while.  I felt… violated.  I felt stupid.  I wanted to go home.

Soon my friends showed up and I warned them about the guy.  He kept looking over in our direction.  I left when he had stepped into the restroom.  I didn’t want him to see me leave in case he followed me to the parking lot.

This entire experience was brand new to me.  I had just started to go out en femme a few months before this happened and was experiencing the world in a different pair of shoes, both figuratively and literally.  Getting approached by a man was another new experience.

It’s amazing I can recall as much as I can, years later.  The range of emotions from anger to fear to powerless was overwhelming.  As someone who spends a lot of their life presenting as male, I was not used to feeling these things.

It was horrible.  It was horrible feeling powerless when I normally feel invincible when I am en femme.  I was angry that this guy just wouldn’t leave me alone when all I wanted to do was dress up, look cute, and see my friends.

This was a new experience.  But it wouldn’t be the last.

The most recent experience was a few weeks ago when Minneapolis had its annual Pride festival and the MN T-Girls had a booth.  We were there to celebrate with members of the LGBTQ+ community and to promote our group.  It’s one of the most fun days of the year.

Pride is a wonderful event.  There’s so much… joy in the air.  It can be an overwhelming experience.  It can be an emotional one.  It’s not an unusual to talk to a parent who stops by the booth to talk about their child, their spouse, their sibling who just came out as transgender and for that conversation to end in a hug.  There’s a lot of hugging at Pride.

As the day was winding down, a guy approached our booth and seemed really nervous.  Perhaps he was simply hot from the summer sun.  I am not sure.  He asked for directions for a specific booth (which was located right next to ours) and I pointed him towards it.  He thanked me and then made his way around the table and put his arm around me and tried to pull me into a hug.

It caught me off guard.  Yes, people hug at Pride but they ask for permission first.

I froze because I didn’t know what he was going to do.  Would he let me go?  Would he touch me with his other hand?  Would he try to kiss me?  I don’t know.

He broke off the hug and walked away.  I don’t even know if he stopped at the booth he said he said he was looking for.

I was shaken.  I felt violated.  Even recalling the moment now makes me sad.

But Hannah it was just a HUG you might be saying.  No.  It was unasked for physical contact.  I have every right to decide who I have an sort of physical contact with, whether it is a handshake, a hug, or anything else.  Regardless of this person’s intentions, as innocent as they might have been, it doesn’t erase the fact that after a few moment of small talk he walked around to my side of the table and put his arm around me.

When I present as male, which I do most of the day and have done so for most of my life, I have never really felt unsafe in public.  I don’t get sent photos of someone’s genitals.  As Hannah, it’s a different story.  Sadly these experiences are no different that what almost every woman experiences in their lives, too.

It has taken about four days to write this post.  It’s not easy to put these experiences and thoughts into words, and I am also hesitant to post this.  I’m a little afraid, to be honest.  One thought that crosses my mind is that guy from Pride looking for me again.  Does he read my blog and did he know I would be at Pride?  Will he come to the next public event I attend?  Is he dangerous?

I don’t broadcast my plans in advance with the exception of Pride and I am always with my friends at the booth, so I am not alone there.  Does this make me nervous about going out?  Yes.  Although it’s not likely I will ever see this specific guy again, I wonder about the next one.  Could the next creep be behind me at Starbucks?  Could the next guy who “sure wants to date me” be following me to my car?

I am used to being careful where I go.  When I go out, I am constantly looking at my surroundings.  Do I see anyone I know? Is there anyone looking at me? Being on guard is second nature at this point, but it will feel different now.  I am even afraid of the virtual backlash I could receive in writing something like this. The internet is a place where we can be as anonymous as we would like, and I won’t be surprised if I get emails or messages from people calling me a bitch or threatening me.

I am not sure I know the reason I am writing this but all of this has been clearly bothering me for a long time.  I think the tipping point was the other day when I was at work and got another explicit message from someone who follows me online.  This was not a message that was more sexual than others that I have received in the past, but this message just… triggered something in me.  It pushed me over the line between putting up with it and shaking it off to getting pissed about it.

Recalling these moments has exhausted me and I think I am done writing this post.  I wish I could end with something more uplifting but to all the girls and t-girls out there, please be safe.

16 thoughts on “Being Safe, Not Polite”