Everything we do is brave.

We are brave when we whisper to ourselves “I am transgender” or “I am a crossdresser”.

We are brave when we shyly walk through the lingerie department of a store.

We are brave when we leave the house en femme.

We are brave when we come out to someone.

We are brave just by existing.

And I am tired of being brave. I am tired that being transgender automatically requires us to face our fears. Sometimes our fear is someone that we know seeing us when we go out en femme. We are afraid of ridicule, or people pointing at us, of people attacking us. We live in a world that doesn’t understand us.

But that in itself is okay. We don’t have to be understood. I have been wearing panties for decades and I still don’t know WHY. There’s no psychological reason I am who I am.

Things have been, well, demoralizing lately, to put it lightly. There are many laws being considered that target our community. There have been many laws that have already been passed. Each “successful” piece of legislation will only encourage another state, another lawmaker to propose a similar, if not identical, law.

At my most pessimistic, I don’t think that this is going to stop. It’s not going to get better or easier. Not in my lifetime.

These laws impact us on a lot of levels. Lately I have been feeling the emotional strain these laws are designed to create. Cruelty is the point for a lot of them. Not long ago I wondered if there would be a day when I would have to disappear. I wondered if I would need to take down my website, disband the MN T-Girls, and stop going out en femme.

These were very depressing thoughts but I have stepped back from the precipice a little.

I suppose going back into the closet is one of the goals for laws like these. To make us vanish.

I felt I was at a crossroads. Should I go back into the closet before things got worse? Should I stubbornly carry on? I used to think my days of rebellion were behind me, but I still feel feisty when I think of some authority trying to tell me what to do.

This doesn’t mean I am not a law-abiding citizen. What I mean is that if “society” or our elected “leaders” are trying to suppress us, it makes me want to be even MORE visible. Sometimes simply existing is an act of rebellion. It’s the most punk thing I can do.

A friend of mine emailed me who was also discouraged about a lot of the politics impacting our community. She was nothing but positive. Part me wondered how anyone could be optimistic and brave these days. She said despite everything happening, it is time to be more visible than ever. She was so… sincere in this.

I couldn’t help but get inspired.

On this Transgender Day of Visibility I am committed as ever to being visible, to being a part of the world.

But I also have to be braver than I ever imagined. And I am tired of being brave. 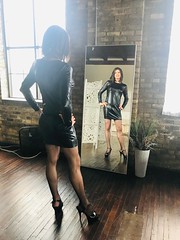