So, the gender, or rather, lack of gender, identification term of non-binary has been popping up in the media a lot more often lately.

Non-binary is the term that describes individuals that do not identify as neither male or female.  This is different than gender fluid which, as defined by the Urban Dictionary is “a gender identity best described as a dynamic mix of boy and girl.   A person who is Gender Fluid may always feel like a mix of the two traditional genders, but may feel more boy some days, and more girl other days. “

As someone who thinks about gender a lot, especially when it comes to gender roles and how (some of) society will impose, enforce and expect certain behavior and clothing depending on the gender we’re presenting as, I am fascinated by non-binary people and how society and the legal system are reacting.

California is considering adding a third gender option to their state identification cards.  Newfoundland is set to hear a case for birth certificates with a non-binary option,  and Canada will now allow gender-neutral passports for non-binary residents.

I am thrilled to see such progress made, or at least considered for those who identify as non-binary.  Any acceptance, legal or otherwise, is positive news for all of us who may not identify with traditional gender roles.

4 thoughts on “A Third Option” 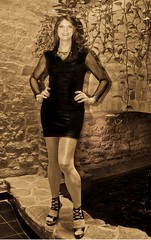