Years ago I wrote for Frock, a magazine focusing on the trans community. It is sadly no longer being published. The other day I was thinking about an article I wrote shortly after I came out to my mom.

My relationship with her has gotten better, actually. But it’s not because of Hannah. Time did that.

Coming out will always change things. We only have one chance to do it and I wish I had discussed this with her in a different way. I understand myself and gender identity in a different way compared to when I wrote this in 2013. I came out as a crossdresser, not as transgender or bi-gender. Today this revelation would go a different way.

I remember sneaking into my mom’s closet all those years ago and trying on pretty much everything.  I was very careful to put everything back how it was.  Every time I would dress up I would think to myself that she could never find out about this.  So last year I was surprised to find myself wanting to tell her about my crossdressing.

Like my most crossdressers, my hobby has certainly grown and evolved.  Once I accepted I was a crossdresser, I was mostly drawn toward lingerie.  At that point in my life, I would have never dreamed of telling anyone.  As I got into my early 20’s, I started sleeping in nightgowns and wearing dresses and skirts once in a while, though never for very long.  At the time, wearing “real” clothes wasn’t something I was used to.  It wasn’t until my wife taught me how to do make up and helped me buy a wig when wearing a blouse and skirt really felt right.  I adopted the name ‘Hannah’ for when I was dressed up, and soon Hannah had her own life.  Her own website, new friends and in a way, a different personality than the male part of me.  My wife started to notice differences between “me” and Hannah.  Hannah was more patient, she listened better, she was more vulnerable, she communicated better…she understood my wife in ways her husband didn’t.  As Hannah, I feel I can relate to my wife in different ways.  In some ways, crossdressing has really strengthened our relationship through communication, hard work and love.  I am a lucky girl, and a lucky man.

It was a warm spring night and my wife and I were on our porch having a glass of wine.  I was wearing a blouse, black pencil skirt and stilleto heels.  “So…when are you going to tell your family?” my wife asked.  I smiled, I had been thinking the same thing.  Back when crossdressing was just about panties, the idea of telling anyone was out of the question.  Whether its panties or boxer shorts, no one wants to know what anyone wears under their clothes.  But as Hannah became, in a way, a real person, I wanted people to meet her.  After a few months, I told my sisters and brother.  It’s difficult to explain crossdressing to someone, but I think they understood.

My relationship with my mom had always been difficult.  In my teens my parents went through a rather nasty divorce.  The divorce was a good thing, it should’ve happened a long time before that, and perhaps that’s where my anger started.  My mom and I fought constantly.  Once I entered my 20’s I calmed down a bit but my mother and I were never really close.  As I got older, I wanted to have a better relationship with her.  I always felt I had a wall between her and I.  When I told my siblings about my crossdressing, I felt a wall came down.  I wanted that with my mom and by telling her, I hoped that it would break the barrier between us.  I would be vulnerable and honest with her.  Telling someone about crossdressing is, in a way, giving them power.  Its saying that they know something about you that few people understand, and to please be mindful as to what you do with this information as it could change the way people see me.  I have been lucky that everyone I have told has been accepting and happy for me.  But if my employer were to find out, I would likely be out of a job.

On a Saturday night, we sat down and I acknowledged our difficult relationship and wanted to be closer to her.  I told her I was a crossdresser.  She was shocked.  I had expected all the normal questions about if I was gay or going to transition…but she never asked.  I told her that I had been crossdressing all my life, how I was never ashamed or confused by it and how happy I was.  She told me that she loved me and that she loved Hannah and she just wanted her children to be happy.  Her reaction and acceptance surprised me just as much as I had surprised her.  The conversation could not have gone better.

I spoke to her after what I told her had sunk in a bit.  She was still digesting what I told her but she still loved me.  Since that night, I have making more of an effort, more than I’ve made in the past, to be a better son.  I hope someday she meets Hannah.  I think she would like her.

7 thoughts on “A Better Son/Daughter” 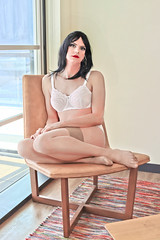