I don’t believe in ‘passing’.

I don’t believe there is a standard, physical or otherwise, that a t-girl needs to achieve in order to look like or treated like a cis-woman.  If there were standards, what would they be?  Can a girl have a shoe size that disqualifies them from looking like a girl?  Can a girl have hands that are too big to be a girl?  Of course not.

I used to desperately want to pass.  I was hesitate for years to dress up or leave my house because I was afraid of being clocked.  My shoulders were too wide, my jawline was too square and a million other things.  It dawned on me one day that I would never think that a cis-woman wasn’t “feminine” enough to be a woman.  If transwomen are women, then why should I have different standards and expectations for myself?

After that revelation, I was ready to step out into the real world, giant hands or not.

Over the years of being in public, I have interacted with baristas, sales clerks, makeup artists (lots of makeup artists), servers, paramedics, cashiers and countless others.  I have had mostly either really positive, or at least mundane, interactions with people in the real world.  Very few have been negative but they have happened.  Unless someone expresses an opinion, good or bad, I never know what people think of me.  Why would I?  I don’t ask the Starbucks cashier what they think of me.  Why would I care?

But I get it.  I really do.  We want to be accepted by the rest of the world.  We dream of being treated as the gender that we are presenting as.  I dreamed for years of hitting the mall and no one batting an eyelash at me as I shopped for heels.

We want to be loved.  We want others to see us as beautiful.  Or at least not yelled at.

It can be a scary world.  It’s not hard to see stories on a very regular basis of transgender people getting hurt, yelled at, discriminated against or threatened.  Some of us want to pass to avoid getting read.  If someone finds out we are trans, will they beat us up?  Will they laugh?  Will they find out who we are in our male lives?’

But passing and feeling confident are two different things.

I went out a couple weeks ago to one of the many malls around the Twin Cities.  I had a makeover, I was wearing one of my favorite skirts and I looked AMAZING.

I felt confident, I felt beautiful, I felt like I could destroy my enemies and deflect any hateful comment anyone could throw at me.

But I didn’t “pass”.  My hands are big, shoulders are wide, my jawline is too pronounced…

But if I waited until I “passed”, I never would have left the house that day or…ever.  Every time I hear that click of my heels on a sidewalk I wonder why I waited so long to venture into the real world.

I had countless interactions that day.  I chatted with a girl in the ladies room about shoes, a makeup artist at Ulta about lipstick and a salesclerk about whether or not that leather miniskirt was available in my size.  It was.  🙂

Based on the looks I get, whether it’s a supportive smile or a longer glance as someone is seeing a t-girl for the first time, I am pretty sure most people in the real world know that I am trans.  And that’s fine.  They can know I’m trans because, well, I am trans.  And you know something?  Most people are either wonderful or don’t care.  I am (almost always) treated with respect.

My point is that I am being treated with respect by people who “know” I’m trans.  What that means is most people (in my experience) are consciously being nice to a transperson.  That says a lot about how they personally feel about our community.  It’s really affirming and makes me optimistic about the future.

I would rather be treated with respect from someone who knows I am trans than treated the same way because they think I am cis.

29 thoughts on “Why Passing Isn’t Important” 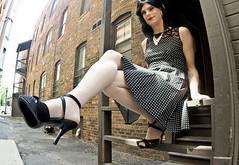 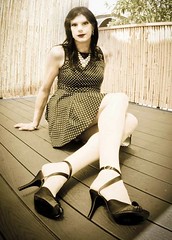 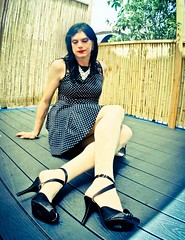